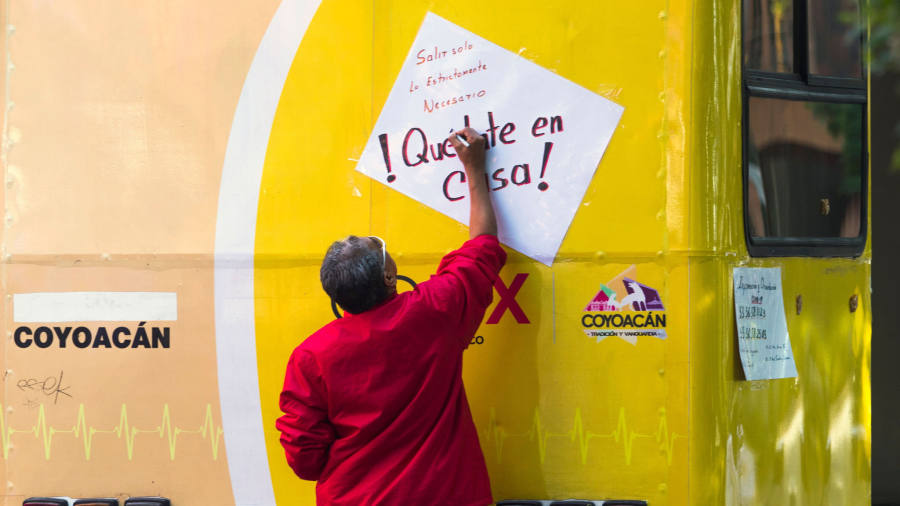 Gabriel Méndez is resigned to having to close his language school as coronavirus slashes demand for English lessons. The Mexican entrepreneur also runs a small pizza business, which he is struggling to keep afloat, but he says he cannot access government help because he is not on an official social programmes registry.

So he is looking to Konfío, a Mexican fintech start-up, whose success at lending modest sums in minutes has catapulted it into the top 50 fastest-growing companies in the Americas, according to an FT ranking of 500 businesses from across the continent, compiled by Statista, a research company.

A client of the online lender for more than a year, Mr Méndez initially borrowed 80,000 pesos ($3,320), repaid it and then borrowed another 120,000 pesos. “The school’s going to go bust, I’m sure of that . . . But I could ask to refinance the loan to save the pizza business,” he says. That would allow him to spread out the repayments to tide him over in the coming months.

Between choosing to borrow from Konfío or a bank, Mr Méndez, who lives in Pánuco in the south-eastern state of Veracruz, says there is no contest. He reckons he will pay 24,000 pesos in interest on his Konfío loan of 120,000 pesos. By contrast, a 50,000 peso bank loan he had taken out doubled with the interest payments, he says.

Konfío — a play on the Spanish word for trust — has become a rising star in the booming Mexican fintech sector and has found itself perfectly placed for the pandemic.

“Timing has helped us because we had just closed a financing round,” says chief executive David Arana, 35, who founded Konfío in 2013. In December last year, before Covid-19 reached Mexico, the company had closed a $100m funding round led by Japan’s SoftBank.

The company, which began operations in January 2014, has raised more than $400m in debt and equity financing, says Mr Arana, an MIT maths graduate. “If we’re able to work with clients and help them get through this rough patch, customers will come back . . . there are going to be very good opportunities once this is over.”

If we’re able to work with clients and help them get through this rough patch, customers will come back

Konfío’s website has seen a 20 per cent surge in visits since the pandemic hit. The company estimates 45 per cent of its customers will need some kind of flexibility on their loan terms and it is working with clients on bespoke plans to defer repayments. This, the company believes, will keep a lid on non-performing loans, which stand at 4.95 per cent.

Konfío boasts that it can approve a loan in seven minutes with no collateral, making it a hit with small businesses, which can struggle to secure financing in a country where less than 50 per cent of people have a bank account. Konfío’s average loan size is now some $25,000 with an average interest rate of 28 per cent.

Mexico’s economy is forecast to contract as much as 12 per cent this year due to the coronavirus. Mexican President Andrés Manuel López Obrador has refused to take on debt to fund a major stimulus package but is offering 3m cheap loans for small businesses, with an interest rate of 6 per cent. Officials say the government is also making loans available to companies not on the registry of recipients of social programmes, but they are micro loans only.

For other Konfío clients, like Joan Cordoves, the government credits are too small — he has borrowed 2.5m pesos from Konfío for his franchise of the Dinner in the Sky experience, in which diners are hoisted 45 metres into the air on a crane. But with the restaurant closed since March 18, he needs to negotiate extra time for repayments.

“The key in the current crisis is to have liquidity,” says Konfío’s website. Fortunately, that has hitherto been flooding into Mexico’s tech sector.

Enrico Robles, chief financial officer and intelligence director at Endeavor México, which helps entrepreneurs scale their start-ups, says 2019 was a “historic year for Mexico” accounting for half of the $1.6bn raised for tech ventures in the past decade. Of Mexico’s nearly 400 fintechs, a third are in crowdfunding, digital banking and lending, he adds.

“In 2019, fintech was the top sector by deals and dollars, a trend that has been growing for at least the past three years,” says Julie Ruvolo, director of venture capital at the Association for Private Capital Investment in Latin America.

The country’s smaller businesses, however, may have to wait before they feel the benefit of these flows.

“If small firms were underserved in the past, for a while they’re going to be even more underserved,” Konfío’s Mr Arana says. “This [pandemic] just makes our mission much more necessary.”